Pacific women and girls continue to face significant disadvantages despite Pacific Island Countries (PICs) committing to the Convention on the Elimination of All Forms of Discrimination against Women (CEDAW), with the exception of Palau and Tonga, Beijing Platform for Action (BPfA), the Revised Pacific Platform for Action on the Advancement of Women and Gender Equality (RPPA), and other relevant regional agreements. Gender inequality and women’s disempowerment are causal factors in why women and girls are disproportionately affected by climate change and disasters. These preexisting inequalities can be further exacerbated if gender issues are not adequately assessed or incorporated into climate change adaptation and mitigation, and DRR efforts.

Documented evidence from around the world demonstrates that climate change and disaster impacts are not gender neutral. This also applies to the Pacific region, where available evidence shows there are differences in how men and women are affected by, cope with and respond to the effects of climate change and disasters. Pacific women are more likely to be killed by disasters than men. Sexual and gender-based violence against women and girls – of which the Pacific region has one of the highest rates globally – has been shown to escalate in the aftermath of a disaster. The physical burden on women and girls also increases disproportionately after a disaster, as they are required to spend more time searching for clean water and food, and keeping their family safe and healthy. In addition, women have increased susceptibility to climate- and disaster-related health risks, including diarrhoea, dengue fever and malaria. As pervasive gender inequalities contribute to women’s vulnerability, and also stifle their capacities, it is critical that efforts to address climate change and disaster risks must also redress the underlying inequalities to achieve effective and sustainable development. Planning for and responding to climatic risks and disasters provide a window of opportunity to address some of these social imbalances through gender responsive strategies, policies and practices.

The report presents an analytical framework to explore and interpret evidence on the status of policy; institutional arrangements; implementation and practice; advocacy, knowledge generation; and women’s participation in efforts to incorporate gender equality into climate change action and DRR. 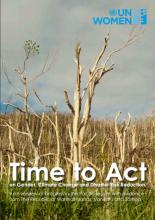