It is with pleasure that I hereby submit to Parliament the 2015 Annual Report of the Ministry of Climate Change Adaptation (MCCA), Meteorology & Geo-Hazards, Energy, Environment and National Disaster Management Office.

process of preparing the 2015 Annual Report has provided a very valuable opportunity for the Ministry team to look back to the year that has passed, reflect on achievements and challenges but also analyse issues
so as to be better prepared and resourced to pre-position the Ministry and Vanuatu for the challenges that will no doubt arise in the new year of 2016.

In 2015 the nation of Vanuatu faced two extreme events: the Category 5 Cyclone Pam and then the strongest El Nino since 1952. These two occurrences tested the capacity of a new Ministry established in December 2013. Government of Vanuatu Ministries and agencies worked together with international and regional partners, donors and Non-Government Organisations to provide critically important expertise. The strong support of the public and private sectors in Vanuatu and internationally must be recognised. A world-wide FLASH Appeal provided valuable financial assistance to response and later, Recovery and Reconstruction Programs.

Cyclone Pam provided valuable lessons for all stakeholders – particularly the natural resilience and knowledge of our people who over hundreds of years developed traditional coping mechanisms to face natural disasters. We realised that the National Disaster Management Office needed better resourcing and operational frameworks – human, legal, policy, technical and budgetary – so that this office is more strongly positioned to carry out its critically important coordination role. As the world’s most vulnerable nation to natural disasters, we must ensure we are better prepared for future emergencies.

At this point, I would like to recognise the contribution by Mr Jotham Napat who as Director General of the Ministry guided its amalgamation and led legislative, policy and budgetary measures to establish and grow theMinistry. We wish him well in future endeavours.

The preparation of an Annual Report is a people, time and resource costly exercise that we need to morph into an investment. By using this report strategically, we can celebrate our achievements but to learn from past events to guide the Ministry’s future.

“The future depends on how we use the past to respond to what we do in the present.”

In years to come, we will look back and remember 2015 as the year in which we faced two hydrometeorological
disasters – Category 5 Cycle Pam and one of the strongest El Nino events since the 1950’s.

However, every cloud has a silver lining. The focus of the world on Vanuatu highlighted the important role played by our young Ministry and its Departments. Despite our strong collaborative response to these two emergencies, our Government, Development Partners and our sector stakeholders realised that we are severely under-resourced - staffing, financially and technically. Strong support has emerged for restructures and additional resourcing to better prepare us for the next disaster. Department Reports will detail these initiatives and proposed plans to strengthen the Ministry.

It is with pleasure that I hereby submit to Parliament the 2015 Annual Report of our Ministry. The 2015 Annual Report of the Ministry of Climate Change Adaptation, Meteorology and Geo-Hazards, Energy, Environment and the National Disasters Management Office has been prepared under Sub-Section 20 (1) (h) of the Public Service Act 1998 and the Public Finance and Economic Management Act 1998 (Section 30 (3)) in accordance with guidelines of the Public Service Commission. 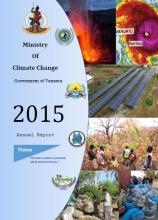