What Vanuatu youth want at COP27 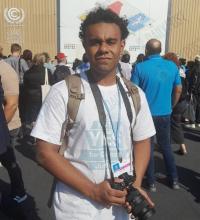 Two youth from Vanuatu traveled to Egypt for the COP27 Climate Change Conference to convey their messages to world leaders.

Jeffrey Wells from Santo joined other young people from the Pacific region to campaign for Vanuatu’s resolution of seeking an advisory opinion from the International Court of Justice (ICJ) on climate change and human rights. They are part of the Pacific Island Students Fighting Climate Change (PISFCC).

Wells said they were at COP27 to demand world leaders to vote yes for the proposal once it is tabled at the United Nations General Assembly (UNGA), and be committed to their loss and damage responsibilities.

“Climate change issues are also human rights issues so if we can have world leaders vote yes that would be very beneficial for all of us, not just Vanuatu but whole of the Pacific,” he said.

“In Vanuatu, we’ve had two category 5 cyclones in the past five years. I can’t constantly live through cyclones. That is unsustainable for an individual and the country. So please world leaders we are begging you to vote yes at the UNGA. If the UNGA doesn’t go through, we will survive but not thrive.

Wells is the Social Media Chair for PISFCC. Through their campaign they demanded governments to end inaction, to reduce fossil fuels and limit global warming rise to 1.5 degrees celsius for a better future.

PISFCC has been campaigning for the ICJ resolution for several years now since it was initiated in Vanuatu and now gaining global community support.

Darren Chilia from Mele village is a member of Our Ocean Matters, a newly established Non-Government Organisation (NGO) working to keep their coast and beach litter-free.

Chilia said he was at COP27 to advocate for the loss and damage concept, an issue that was first raised by Vanuatu at the international climate talks.

“This is an idea born in Pacific our voice as Pacific islanders on the frontline of this climate crisis must be heard. We cannot run away from this, we cannot keep waiting for years of debate and talks, we must act now,” said Chilia.

“Loss and damage in my world isn’t about talks and debate. It is real and it is lived every single day. Our lives, livelihood, culture and tradition have been damage and lost to climate change. In my community much of what we have lost can’t be regained.”

This was the first time for both Chilia and Wells to participate in a COP.

A representative of the Vanuatu delegation, Willy Missack, said he was happy to see there was meaningful participation of youth in the negotiation space.

He said youth have the talent and energy to determine their future.

In Vanuatu, young people are vulnerable to natural disasters but they play critical role in the recovery of their communities and the country as a whole after a crisis, he said.

He added that world leaders must forget their self-interest and negotiate for humanity, they must think heavy on the importance of meaningful youth participation and unite to tackle the climate crisis for a better future.