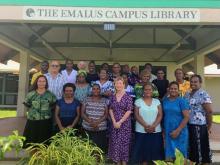 Representatives from the Vanuatu government, the business sector and the NGO community were among the participants at a VIP-led UK/Pacific climate change dialogue, held on Wednesday, February 23 2022.

Hosted by the British High Commission in partnership with USP and with support from Oxfam and Wan Smolbag, the event was an opportunity for partners with an interest in climate change to have a frank and open exchange with UK and Pacific leaders about the outcomes from the COP26 climate summit. Participants also discussed priorities and opportunities to work together in the run up to COP27, which takes place in Egypt later this year. This was a “hybrid” event, which allowed attendees to join remotely or to gather at a meeting hub at the Emalus campus in Port Vila.

Speakers at the dialogue included the Right Honourable Alok Sharma, the President of COP26; Fiame Naomi Mata’afa, Prime Minister of Samoa and Chair of the Pacific Small Islands States, Surangal S. Whipps, President of Palau and Ministers from Fiji, Tuvalu and the Republic of the Marshall Islands. Equal prominence was given in the programme to speakers representing youth, business and marginalised groups, including local communities and indigenous people. Liz Pechan, Vanuatu country officer from the World Bank’s International Finance Group was among the panellists addressing the vital question of financing to meet the challenges of climate change.

In his keynote address, UK COP President Alok Sharma acknowledged what he described as the unique moral authority of Pacific Small Island Developing States, as some of the world’s lowest emitters of greenhouse gases, but also among the most vulnerable to the impacts of climate change. Mr Sharma recognised the crucial role Pacific countries had played at in pushing for ambitious progress on mitigation, climate finance, and adaptation.

In her closing remarks at the dialogue, British High Commissioner to Vanuatu, Karen Bell said: “Today we have heard from Heads of State and Government, community and civil society groups and young people.

“And it is striking that, despite their different perspectives, the messages were remarkably consistent: climate change isn’t theoretical for the Pacific.

It is immediate and existential. We have heard the expectation of urgent action on climate finance for adaptation, loss and damage as well as mitigation. And we hear the call for partners to work with the Pacific to deliver a just and inclusive future. We also have to pay even more attention to the ocean, which is at the heart of this precious, Blue Continent.”

Ms Bell continued that the UK was committed to being a global leader on climate change through domestic action to deliver a net-zero economy by 2050.