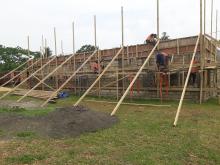 Vanuatu building contractors have been approved to build a provincial disaster operational centre in 3 provinces as an on-going support to be resilient to the frequent occurrences of cyclones and other disasters alike.

This assistance, worth approximately 70 million vatu was made possible through Building Safety and Resilience in the Pacific Project (BSRP), implemented by the Pacific Community (SPC).

Out of 25+ applicants, the 3 winning bidders: Shem's Contruction, Ninane Construction and KIsons Construction signed their contracts on the 19 September for the construction of 3 emergency operation centres in Sanma, Malampa and Penama province respectively.

The procurement process of these contractors involved a selection panel with high level representatives from the National Disaster Management Office, a representative from the Ministry of Climate Change, the Project Coordinator and 2 SPC officers from Fiji.

All the 3 contractors are locals, having 10+ years’ experience on these kinds of job and understand that these b​uilding must be of high standard deisgned structurally to withstand natural disasters.

All constructions are well underway except for the Penama Province as the volcanic eruption on Ambae Island has caused the construction to cease for a while and just resumed construction early November.

The contractors are given a timeline till end of February 2018 to deliver complete buildings.

“Our only concern at this time is that we are on cyclone season, nevertheless we hope to get these high standard building up by early next year” says project coordinator Ian Iercet.​

Caption: Shem's Construction half way through the construction of the Provincial Emergency Operation Center on Santo