The Government of Vanuatu through the Ministry of Climate Change has organised and hosted the participation of Vanuatu delegation to the COP26 meeting held virtually from 1st to 12th November 2021 at the Grand Hotel in Port Vila. The purpose of hosting such national event is to engage delegates and raise their understanding about this global event at a national level.

Vanuatu’s participation at this COP26 is important to support outcomes of Vanuatu’s obligation to the United Nations Framework Convention on Climate Change (UNFCCC). Key issues discussed in this COP26 are Article 6 – carbon markets, climate finance, Adaptation, Loss and Damage and the Enhanced Transparency Framework (ETF). Any decision made by this COP will eventually become an obligation for the Government of Vanuatu to meet.

Vanuatu delegation comprises of the  different sectors, whose participation are crucial throughout these two weeks of COP meetings and including Vanuatu’s Ambassador to Switzerland Mr Sumbue Antas and Mr Dreli Solomon, Charge d’Affaires to Vanuatu’s Embassy in Belgium who are attending the COP in person in Glasgow, Scotland.

The Vanuatu delegation has concluded their deliberations to the COP26 negotiations at the end of the week, on Friday 12th November 2021  a short report back on the outcome of Vanuatu’s participation and also to share the outcome of COP26 and way forward for Vanuatu with the high Commissioners from Australia, New Zealand and British high comissioners,with the Minster of Climate Change Hon.Bruno Leingkone Tau, including other managers, Directors and Coordinators, whose delegates a present through out the 2 weeks of COP26 virtual meeting. 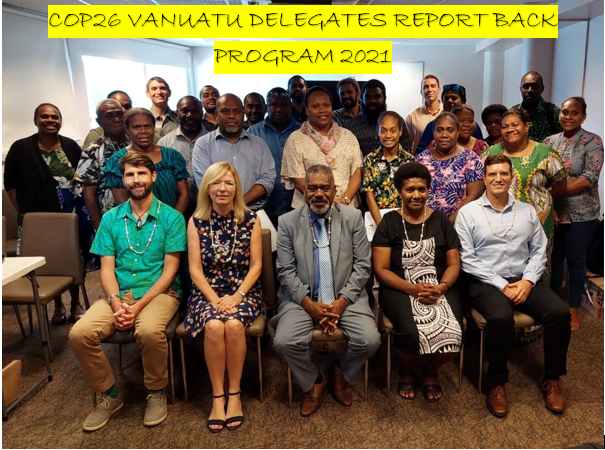