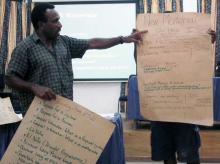 The Republic of Vanuatu has had a busy week dedicated to addressing the issues of climate change and disaster risk reduction.  Recently ranked the #1 most disaster prone nation in the world by the United Nations, there is little wonder that a heightened focus on adaptation and disaster risk reduction is one of the country’s highest priorities. Beginning with World Disaster Day, the nation’s governing body on climate change and disaster risk, Vanuatu’s National Advisory Board organized three major meetings and workshops on the island of Espiritu Santo, Vanuatu.  In a spirit of collaboration, cooperation and harmonization, the activities were jointly supported by SPC-GIZ, SPREP, EU, Red Cross and the Government of Vanuatu.

Drawing on and building from lessons learned from past projects helps us ensure that we continue to move forward in development and avoid previously made mistakes.  Sadly, very few of these lessons are made available to the government to help in future planning.  SPC-SOPAC’s Integrated Water Resource Management Program has been operating in Vanuatu since 2009, and this week over 15 provincial government implementers of the program worked with the Vanuatu National Advisory Board to document in detail key lessons learned and recommendations.  These valuable lessons learned will soon be available to the public on the government’s new Climate and Disaster portal www.nab.vu, making future climate change projects more robust and sustainable.

Another focus of this week’s activities was a hands-on training for government officers on how to mainstream climate change considerations into their daily activities.  Too often, climate change is either completely forgotten, or added as a last minute thought into activities and plans, primarily because officers to not know exactly how to go about addressing such a complex problem! That changed this week as the SPC-GIZ Climate Change Program gave 20 Vanuatu government planners and technical officers a step by step approach for incorporating climate issues into development.  The training, adapted to the Vanuatu context, was based on the internationally renowned OECD-GIZ course on integrating climate change adaptation into development planning.  The Lord Mayor of Luganville Municipality remarked, in response to the successful outcome of the training, “now climate change is everybody’s business”, emphasizing that climate action and responsibility belong to every single sector and not just to the departments of meteorology and environment.

To cap off the week, the National Advisory Board on Climate Change and Disaster Risk Reduction brought together over 60 representatives from Vanuatu’s Northern provinces to give their views on a future national direction for climate and disaster work.  Although Vanuatu has been successfully implementing climate change resilience programs since the 1980’s, the work has never been guided by a national policy.  This year, the Vanuatu parliament’s Council of Ministers unanimously agreed that Vanuatu will develop an integrated National Climate Change and Disaster Risk Reduction Policy and Action Plan that captures and directs the multiple climate and disaster programs, projects and actions currently being implemented in the country.  The new Policy, due for Parliament endorsement in 2013, will give clear guidance to government, civil society, academic institutions and development partners on where and how to focus their time and resources.  This week’s consultation was unique in that it gave special attention to stakeholder’s commonly left out of government policy development, including disabled people, provincial councils of women, provincial councils of chiefs and NGO field officers.

Vanuatu is charting a new and forward course in its efforts to enable climate change adaptation and disaster risk reduction.  In closing the weeklong series of meetings and workshops, Director of Vanuatu’s National Disaster Management Office Shadrack Welegtabit said “while nearly all of the climate changes and associated disaster risks are caused through no fault of the people of Vanuatu, we have a responsibility to take firm hold of our future development, and at every opportunity enable adaptation and risk reduction.”