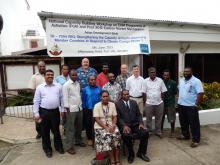 Participants from the different Government Ministries, electricity utility companies, private sectors, solar retailers and Non-government Organisations have benefited from a national capacity building workshop on the Clean Development Mechanism (CDM) programme of activities (PoA) as part of climate change mitigation at the Melanesian Hotel this week.

The capacity building workshop was carried out under the ADB Regional Technical Assistance 7394 on Strengthening the Capacity of Pacific Developing Member Countries to Respond to Climate Change (Phase 1) (43071-012) and was aimed at helping national stakeholders on climate change mitigation initiatives to have a clear understanding about the CDM Programme of Activities and the Post 2012 Carbon market mechanisms that Vanuatu as a developing nation can benefit from.

The workshop was officially launched by the Minister for Climate change Adaptation, Meteorology, Geo-hazards and Energy Thomas Laken. In his opening remarks, he acknowledged the numerous supports Vanuatu has received from ADB and other development partners into assisting Vanuatu in the area of CC over the years.

“I would like to acknowledge the presence of our donor and implementing Partner the Asian Development Bank including our ADB Consultant, Dr Srikanth Subbarao….especially in assisting us in setting up the Designated National Authority and help in building the capacity within the country…. Now through this assistance from Asia Development Bank (ADB) we would be able to strengthen our contributions towards mitigating climate change.” he stated in his speech.

To show Vanuatu government’s leading role into promoting the CDM Programme of activities, Minister Laken welcomed stakeholders’ participants for attending the workshop as this is a sign of strengthening government and stakeholders’ efforts and contributions towards fulfilling Vanuatu’s commitments to the Kyoto Protocol.

The Clean Development Mechanism (CDM) under the Kyoto Protocol provides a market based mechanism so that developed countries can invest in low cost abatement opportunities in developing countries, like Vanuatu and receive credit for the resulting emissions reductions.,

The CDM can contribute to sustainable development through; Transfer of technology and financial resources, sustainable ways of energy production, increasing energy efficiency & conservation, poverty alleviation through income and employment generation and local environmental side benefits.

Participation in the CDM and the international carbon market has been a missed opportunity for most of the Pacific Island Countries including Vanuatu due mainly to complex procedures, long project gestation period, and limited institutional and stakeholder capacity.

The CDM Executive Board under the United Nations Framework Convention on Climate Change (UNFCCC) realized the asymmetries in participation wherein some countries such as the Pacific Island Countries were side-lined from CDM and global carbon market activities due to smaller sectors and projects, low Certified Emission Reduction (CER) volume per activity, and high transaction costs.

To overcome these barriers, the UNFCCC secretariat came up with several simplified procedures and guidelines including the concept of CDM Programme of Activities among a few others. The current assignment under the ADB technical assistance aims to build the capacities and raise awareness among institutions and other stakeholders on the post-2012 CDM and international carbon market mechanisms as well as technical support in identifying and developing potential projects under programmatic CDM in selected target Pacific DMCs (Fiji, Solomon Islands, and Vanuatu)

The workshop also introduced stakeholders to “Nationally Appropriate Mitigation Actions (NAMAs) and its role in terms of integrating various climate change mitigation activities and bringing them under a common platform.

The workshop was funded and facilitated by the Asia Development Bank with support from the Climate Change Unit at the Vanuatu Meteorology and Geo-hazards Department (VMGD).