It is with pleasure that I hereby submit to Parliament the 2017 Annual Report of the Ministry of Climate Change. A scholar once said, “a goal without a plan is just a wish.” The 2017 Annual Report for the Ministry of Climate Change is an important document in the planning process, allowing our Ministry to assess what has been done well and what activities remain to be implemented or strengthened in the coming years.

In 2017, the Ministry was faced with three diff erent disasters. Firstly, Tropical Cyclone Cook, a Category 2 cyclone that passed over Vanuatu resulting in destructive winds, heavy rainfall, fl ash fl ooding and rough seas with heavy swells over northern, central and southern provinces. Malampa and Shefa were the most aff ected provinces. The system adversely aff ected fruit trees, crops and gardens across the country. The most signifi cant damage to crops were reported in parts of Malampa.

Finally, the Ambae Volcanic Crisis response triggered the Government of Vanuatu to issue a state of Emergency for the people of Ambae, forcing over 11,000 people to leave the island. Through it all, the Ministry in collaboration with other key ministries and partners, responded eff ectively and effi ciently to the aff ected communities. I would like to acknowledge and recognise government  stakeholders, partners and individuals who have worked tirelessly during the Ambae Volcanic crisis response.

Despite these challenges, there was considerable progress in achieving the strategic objectives of the Ministry’s 2016 - 2018 Corporate Plan, which links key Government strategies and planning priorities to operational delivery. These achievements are highlighted in this report.

The process of preparing the 2017 Annual Report allows us to refl ect on the past year and plan better for the future, enabling us to improve resilience, climate change mitigation and coordination of responses to natural disasters for the wellbeing of our nation. 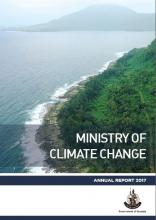