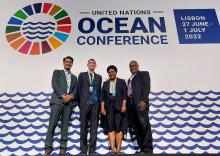 From June 27 to July 1, a high-level delegation from Vanuatu made waves at the 2nd United Nations Oceans Conference held in Lisbon, Portugal.

The ocean is critical for Vanuatu’s development, and for global sustainability.  Oceans cover 70 percent of the Earth’s surface, is the planet's largest biosphere, and is home to up to 80 percent of all life in the world. It generates 50 percent of the oxygen we need, absorbs 25 percent of all carbon dioxide emissions and captures 90 percent of the additional heat generated from those emissions. It is not just ‘the lungs of the planet’ but also its largest carbon sink - a vital buffer against the impacts of climate change.

And that is why Vanuatu attended this year’s conference, to make high-level political gains in its campaign to bring climate change to the International Court of Justice.

Minister Bule remarked to the plenary that “Climate change is the single greatest threat facing the Blue Pacific and our global oceans.

“We simply cannot continue with business as usual.

“The window to act will have closed by the end of this critical decade.

“We must see transformational action to protect our coral reefs, our coastal environments and the fundamental human rights of all of us who depend on them.”

Speaking at a range of events, including a special side event on the International Court of Justice (ICJ) campaign, several interactive dialogues on behalf of the Pacific Small Island Developing States, a Commonwealth Blue Charter event, and a Summit convened by the Pacific Islands Forum, Minister Bule made it clear that “The ICJ campaign is not a court case, but a request for legal clarity that will help us all make policies and plans with sufficient climate action to save our Blue Pacific.

“He reminded delegates that the International Court of Justice is the only principal organ of the UN System that has not yet been given an opportunity to help address the climate crisis.”

Prime Minister Bob Loughman also made a video address to the Conference, stating that although climate change “started out as a technical issue, it is now a political one, and that Governments must put a stop to this destruction of our one planet one oceans.”

The Vanuatu delegation held bilateral meetings with numerous Ministers on the topic of climate change and oceans, including with Ministers from Australia, Portugal, Kenya, Angola, Slovenia, Tanzania and more.

During the bilateral meeting between the Vanuatu delegation and the Portugal delegation, there were discussions on advancing areas of common interests between the two countries.

More than climate change, Vanuatu highlighted its early first moved status in the Pacific to ban single use plastics, and showcase best practice in marine conservation including through traditional knowledge.  Several donors expressed interested in supporting community ocean action and first steps to open funding channels have been taken.

Overall, the one-week conference led to further global confirmation of the science – that the ocean is facing unprecedented threats as a result of human activities. Its health and ability to sustain life will only get worse as the world population grows and human activities increase. If we want to address some of the most defining issues of our time such as climate change, food insecurity, diseases and pandemics, diminishing biodiversity, economic inequality and even conflicts and strife, we must act now to protect the state of our ocean.  Vanuatu is leading the way in the Pacific to protect, manage and safeguard our oceans.