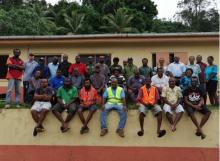 The Torba Provincial Emergency Operation Center (PDOC) as the leading agency responding to disasters in Torba Province has issued orders to continue cleanup campaign to eliminate malaria in the province.

The PEOC has urged everyone to take action to continue with communal cleaning up to ensure malaria is contained and eliminated especially after any disasters.

Torba provincial government implemented the second phase of the cleaning up campaign on May 14 2020, which has gather all chiefs, churches, women groups, youth groups, government departments and partner stakeholders to clean up around Sola state land, which has been declared as a malaria hotspot after TC Harold.

The clean-up campaign was initiated by Sola Youth Council and Church Youth groups during the climax of the outbreak of malaria in Sola and to continue the practice of Primary Health Care to protect and fight against COVID- 19, as the main idea behind Health and Hygiene practices.

The first clean-up campaign was carried out on the 6th May 2020 led by the youths supported by the communities of East Vanualava, line government departments, stakeholders and Torba provincial government.

Member of Parliament for Banks constituency Mr. Danny Silas has been on the frontline to engage with his community during the second phase of the cleaning up campaign.

MP Silas called on all people of Sola in Vanualava to unite and stay committed for change to happen.

The Secretary General Reynold Surmat with the provincial staff led the second phase of the cleaning up campaign.

Mr. Surmat acknowledged the chiefs’ council, churches, government departments and stakeholders for their contribution and support in making this campaign a success.

He emphasized that solidarity and unity needs to be sustained not only for malaria elimination, but for the betterment and success for the people of Torba Province in future.

Plans are underway to roll out similar campaigns to other Area Councils around the province in response to the orders endorsed by the PEOC to ensure Torba province is malaria free. 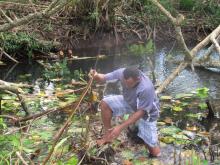