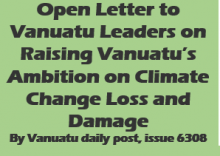 We, the civil society of Vanuatu, would like to applaud you and other Pacific Leaders for your tireless efforts to address the devastating impacts of climate change on our country and our people, recognizing that it is the single greatest threat to our sustainable development and wellbeing.

We know that Vanuatu is not responsible for this climate emergency, a crisis that was caused by the richest and most developed countries and fossil fuel companies that for years have treated our atmosphere as a giant dumpsite for harmful greenhouse gas pollutants. Knowing the effects of global warming, they actively suppressed this information and invested millions of dollars in misinformation campaigns so they could keep earning billions of dollars from fossil fuels. This is a crime and has led to climate injustice and ecocide on a global scale.

Today Vanuatu is one of the most climate vulnerable countries on the planet, our people have lost lives and land, and every year face increasingly destructive storms leading to food and water insecurity as well as loss of livelihood and sense of identity. Loss and Damage is climate change in Vanuatu.

While you, are leaders, are working hard to enable us to adapt, at some point we must recognize that adaptation isn’t enough to meet the increasing climate threats, and we suffer loss and damage. Two recently category 5 cyclones have caused us to lose over 60% of our GDP in a matter of hours. This is loss and damage; this is climate change in Vanuatu.

Vanuatu recently submitted its Nationally Determined Contribution (NDC), with domestic climate targets to the United Nations. In this document, Vanuatu commits that 100% of our electricity will be from renewable sources by 2030. Vanuatu also commits to reduce climate impacts in the sectors of transport, food security, infrastructures, water, tourism and energy. Of course, all of these commitments are dependent on rich developed countries footing the bill, as they promised to do as part of the UN Climate Treaty.

But where is loss and damage? Vanuatu is only responsible for 0.0016% of global emissions, so why is carbon pollution such an important focus in Vanuatu’s Nationally Determined Contribution? Other countries have set dozens of climate adaptation and loss & damage targets, whereas Vanuatu has only included four.

Leaders, as civil society organizations working at the grassroots and seeing the first-hand suffering of Vanuatu’s people from climate loss and damage, we humbly request that Vanuatu resubmit a more ambitious Nationally Determined Contribution, one that also draw it importance in Adaptation and Loss & Damage. This year the United Kingdom will be hosting the UN Climate Conference and they have placed a strong priority on resilience in developing countries. This meeting is an opportunity to show the world this year that Vanuatu is not just the most vulnerable, but also the most ambitious nation when it comes to Adaptation and Loss & Damage in a Nationally Determined Contribution.

Currently, Vanuatu’s NDC does not fully reflect national priorities and does not include sufficient ambition on Adaptation and/or Loss and Damage. Thus, we ask you to step up, demonstrate your leadership, and increase the ambition of Vanuatu’s NDC before UNFCCC COP26 in November 2021.

Note: This letter is derived from the views of members of the Vanuatu Climate Action Network, an inclusive network for all Vanuatu non-government and civil society organizations working on climate action at all levels.