OKI TIN FISH TO BE REMOVED AND BANNED IN VANUATU: NDMO 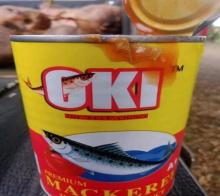 The National Disaster and Management Office (NDMO) advised that government authorities concern will implement the removal and banning of the import of OKI tin fish product from China.

The OKI tin fish was alleged to have worms inside the can and has raised a lot of concerns about the quality of the tinned fish especially during the Tanna Ash Fall response.

The Director of NDMO, Abraham Nasak explained that the Ministry of Health (MoH) and other authorities have been advised to deal with the product and the importer of the Oki tinned fish.

Ministry of Health (MoH) has confirmed through the office of the Director of Public Health that a test has been done on the Oki tinned fish at the Vila Central Hospital (VCH) laboratory and found that the Oki tinned fish is not suitable for consumption according to Food Control Act.

The MoH reiterated that even though the worms are dead and do not pose any risk of disease, it is a physical hazard and not fit for consumption when it is not part of the canned product.

According to the Food Control Act and Food Control Regulation, health inspectors and other authorized officers within the Port Vila Municipal Council (PVMC) have the power to remove any food that is not edible.

The MoH has penalized the importer of the Oki tinned fish under the Penalty Notice Regulation Order No.54 of 2010. It has also advised the importer to retrieve all Oki fish products in the shops that are selling the product.

The citizens of Vanuatu are advised not to buy the Oki tinned fish as part of the five recommendations from the MoH.