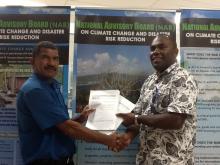 The Government of Vanuatu is committed to build and equip over Vt52 million worth of Provincial Disaster Centers for Torba and Tafea provinces as part of its continued efforts to strengthen its capacity to response effectively and timely to disaster events in Vanuatu.

To mark the realization of this initiative, a contract was signed on the September 2, 2015 between the Director of the Vanuatu National Disaster Management Office (NDMO) Shadrack Welegtabit on behalf of the Government and Jimca Loli representing the Loli Business Enterprise as the contractor to build the two centers.

The two Provincial Disaster Centers will be located in the Sola Government station, Vanua Lava Island, Torba province, and in the Isangel Government station in Tanna Island, Tafea province. The construction work is expected to commence next week and to be completed in six months before February 2016 according to the signed contract.

The total cost for building the disaster centers is Vt47, 358,450. The Isangel center is worth Vt25M and the Sola center is worth Vt22.3M to build. The two centers will each house a conference room which will be used as the national disaster operation center, two office spaces, a media room, storage and archives room, a server room, kitchen, bathroom and a reception area. A budget has been allocated to equip the centres as well once built

Once completed, the two fully furnished permanent buildings will add to the improvement and development of the building infrastructure and equipment facilities in the two Provinces.

The handing over ceremony largely contributes to the progress of the Government’s ongoing efforts to improving emergency response services through NDMO to the two Provinces, which already have their Provincial Disaster Officers stationed at the sites since April 2014.

Director Shadrack Welegtabit during the contract signing ceremony said, “NDMO hopes to upgrade and expand its roles and responsibilities from national to provincial and down to community level to properly manage disaster in the country, and this event marked a progress into our plans to serve our people in the Provinces.”

The building of the two centers, and the posting of their two Officers was made possible through the Increasing Resilience to Climate Change and Natural Hazards (IRCCNH) Project currently managed by the Vanuatu Meteorology and Geo-hazards Department (VMGD) through its Project Management Unit (PMU). The project is jointly funded by the Global Environment Facility (GEF), and the European Union (EU) under the Global Climate Change Alliance (GCCA) and the Global Facility for Disaster Risk Reduction (GFDRR) funds.

The IRCCNH project is a Government owned Project with an overall development objective to help increase the resilience of communities in Vanuatu to the impacts of climate variability and change and natural hazards on shelter, water supply as well as livelihoods.

With this objective, the IRCCNH project is looking at assisting the Government with its institutional strengthening efforts on climate change adaptation and disaster risk management, one being to support the NDMO by establishing these two fully equipped provincial disaster coordination centers in the Provinces of Tafea and Torba.